Both Celtic and Anglo-Saxon cultures have shaped our region, as reflected in the historical name of our estate « LA CLAYMORE ».  This English-sounding name used to be spelled as «Claimh Mhor» and was used to denote the great sword of the Scottish Highlanders, originally Celtic warriors, who were most probably present in the Aquitaine region with the British armies.

Our first wine is called « CLAYMORE » and comes from vines planted on the vineyard parcels of the same historical name (as seen on ancient maps).

The origin of this unusual name for a French soil is probably due to the Anglo-Saxon presence in the Bordeaux region in the 11th and 12th centuries.  In the same period the Benedictine monks had decorated the monolithic church in Saint-Émilion with bas-reliefs inspired by the Celtic culture of Great Britain, like « Le chemin des allégories » and « the Holy Grail fresco », still existing.

The name of our wines and the illustrations of our prime wine labels (cup, dragon, swords), are derived from these stories and legends.

Origin and illustration of the name of our wines 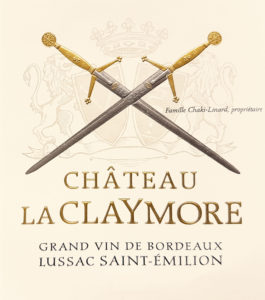 These crossed swords are called CLAYMORE (« Claidheamh Mor » in Celtic), the hilt of which is decorated with clovers.

The Scottish Highlanders had to use both hands to wield these very heavy swords. 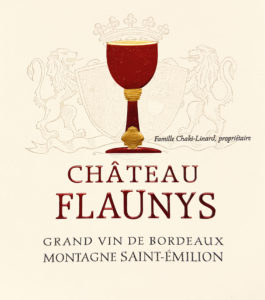 We have named our vines of the Montagne Saint-Emilion appellation “FLAUNYS”, which means PARADISE in Celtic-Gaelic.

For the Celts, heaven has often been symbolized by a cauldron or a cup, filled with an elixir of eternal life for the brave warriors.
The beautiful Holy Grail fresco of the Saint-Emilion monolithic church shows this cup, which inspired us to choose the red cup with golden details for our Château FLAUNYS label. 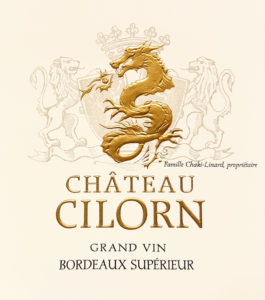 CILORN is based on a Celtic legend about the story of the fairy Viviane who tamed a so-named dragon.  Thus relieved, the dragon CILORN has become the tireless guardian of the Avalon mysterious island

Even now inside the monolithic church of Saint-Emilion, there is a beautiful atypical sculpture named “Le Chemin des Allegories”, representing a dragon taming. The dragon means the strength of impulses and passions that human being has to control smoothly to advance.
This is why we have called “CILORN” our wine produced from our carefully-controlled vines of the Bordeaux Supérieur appellation. 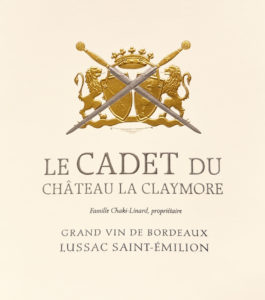 Formerly in the noble families, the first son inherited the estate, the second became a priest, and the CADET learned the art of fight.

Nowadays in a family, the CADET is the latest born child, the youngest.  That is why the wine produced by our younger vines is named CADET. Its structure, elegant and delicate needs a shorter maturing. 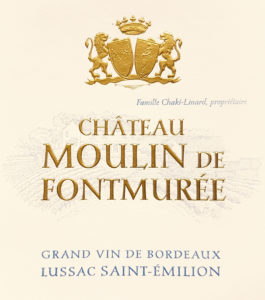 More than one hundred years ago on the Estate, a mill with a rotating wheel used water directly from a little river to mill wheat into flour.

François LINARD and his wife have renovated this small hamlet named Moulin de Fontmurée, including a house with barn.  This name was given to the Estate’s second wine.  This label shows an illustration of our vines and Estate on the background 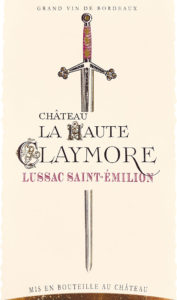 where English and French soldiers fought during the One Hundred Years’ War.  This historic parcel of land is ideally situated on a clay-limestone plateau overlooking the commune of Lussac. 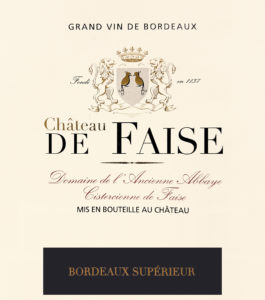 CHATEAU DE FAISE is one of the oldest wine-growing area of Libourne.

On her return from the Crusades, the Countess of Castillon founded the Cistercian abbey of Faise in 1137.  That is when the monks struggled hard to clear the forest so as to plant vines on the Château de Faise soil.

In the 14th century, the Faise wines were served to the court of the King of England.

The siliceous-clay soil with mangesien sub-soil gives the wine roundness, spices and elegance.